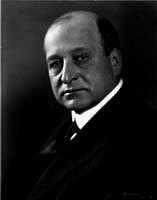 Henry Justin Allen, born in 1868 in Pennsylvania, was editor and publisher of the Wichita Beacon and one of the leaders among Kansas newspapers. The Allen family came to Kansas in the 1870s, settling in Clay County.

Allen attended Baker University where he became interested in journalism as a staff member of the Baker Orange. Allen left the university before graduating and in 1891 was hired to manage the Salina Republican. When the newspaper was sold three years later, Allen bought the Manhattan Nationalist. Allen partnered with with Joseph L. Bristow to purchase the Ottawa Herald and the Salina Republican, which became the Salina Journal. Allen served as editor and manager of both newspapers until 1907. Bristow kept the Journal and Allen the Herald, which he sold the next year to purchase the Wichita Beacon.

The Republican party nominated Allen as their candidate for governor while he was in France during World War I, where he was head of communications for the American Red Cross. Allen was elected the 21st governor of Kansas and served two terms from 1919 to 1923. While Allen was in office the national prohibition and woman's suffrage amendments were ratified by the Kansas legislature. As governor, Allen called for the ouster of the Ku Klux Klan in Kansas, after the organization planned to parade. With the state in the midst of a coal strike, Allen was concerned that the Klan's visibility would intimidate the African American coal workers who were refusing to strike. Allen also created the Kansas Court of Industrial Relations to push collective bargaining but prohibit strikes. When his friend, William Allen White, wrote an editorial in protest, Governor Allen had White arrested. Before the Kansas Supreme Court could rule on the anti-Klan action, White campaigned for governor on an anti-Klan platform. White lost his bid and the ruling finally came in 1925, finding the Klan to be a "foreign corporation" that could be legally ousted, making Kansas the first state to take such a stand.

In 1929 Allen was appointed to fill a vacancy in the U.S. senate, where he served from 1929-1930. From 1928-1932 Allen was director of publicity for the Republican National Committee. He served one year in 1931 as assistant to the president of the Reconstruction Finance Corporation. In 1915 Allen and his wife, Elsie J. Nuzman Allen, hired architect Frank Lloyd Wright to design a house for them in Wichita. The Allens lived in the Prairie style house until 1947. It is the only structure designed by Wright in Kansas. Allen died in 1950.