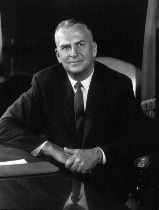 William H. Avery was born in Wakefield, Clay County, Kansas, on August 11, 1911, and graduated from University of Kansas at Lawrence in 1934. He engaged in business as a farmer and stockman near Wakefield, was director of the Wakefield Rural High School Board of Education, served two terms in the Kansas state house of representatives (1951-1955), and was elected to the U.S. Congress in 1954. After a decade on Capitol Hill (served, January 3, 1955-January 3, 1965), Avery chose to return to Kansas and run for governor. He won the Republican primary and general election in 1964, but the incumbent governor was defeated in his bid for reelection in 1966 by Robert Docking.