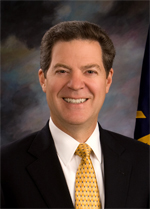 Born in Garnett, Kansas, on September 12, 1956, Sam Dale Brownback, a Kansas State University graduate, served as secretary of agriculture for the state of Kansas before winning election to the U.S. House of Representatives in November 1994.

Two years later, he resigned his position after defeating Jill Docking, a Wichita Democrat, for the unexpired term of Senator Bob Dole. Brownback was reelected in 1998 and again in 2004. In 2010 he was elected 46th Governor of Kansas.

Governor Brownback was approved by the United States Senate on January 24, 2018 as U.S. Ambassador for International Religious Freedom.